The Swedish weather was generous and the racing line dry for the Qualifying Heats of the Third Round of the FIA Karting European Championship unfolding this Saturday at Kristianstad! At the end of today’s 24 qualifying races, Dexter Patterson, in OK, and Tuukka Taponen, in Junior, marked the Asum Ring as their own territory, topping both provisional classifications with one race to go before the decisive Finals! 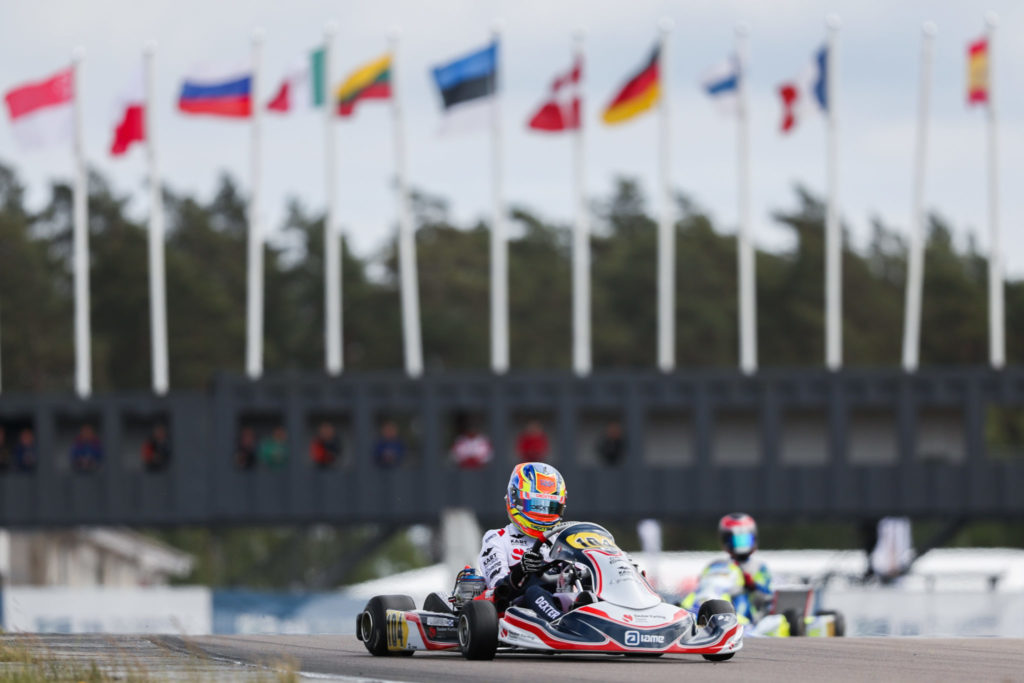 Four races, four wins: Dexter Patterson (KR/IAME) made it clear about his ambitions in the OK class this Saturday on the Swedish Asum Ring! The Sauber Junior driver topped the provisional points standings with Lorenzo Travisanutto (KR/IAME) close in his mirrors. The Italian also had a productive day on the track that crowned him World Champion only a few months ago as he won three out of his four races. With only two points splitting the two current leaders, the battle for Pole position will be worth its weight at tomorrow’s final heat! In third, Gabriele Mini’ (Parolin/TM) took two wins and will be again one to watch closely, just like Pedro Hiltbrand (CRG/IAME), fourth, with three top-3 finishes including a win. Luigi Coluccio (BirelART/TM) came behind in fifth position with two top results.

Listen to Patterson’s comments at the Saturday Press conference:

Two weeks after a difficult weekend at Genk, Tuukka Taponen (Redspeed/IAME) went through the day unbeaten in Kristianstad, winning all of his four Qualifying Heats from the front row of the grid. Friday’s Polesitter Andrea Kimi Antonelli (KR/IAME) clinched two wins as well as two second-places to follow the Finnish driver by a close distance in the provisional Junior classification. Nikita Bedrin (Tony Kart/Vortex) concluded his run in third position with three victories in front of Philip Victorsson (Tony Kart/Vortex), winner of his second race, and Jamie Day, who three times crossed the finish line within the top 3. Other heat winners this Saturday included Marcus Amand (Kosmic/IAME) who classified in eight place, and Karol Pasiewicz (Luxor/LKE) whose DNF in his first race dropped him to a provisional 21st position. With one Qualifying Heat left for all six groups tomorrow morning, uncertainty will remain until mid-day to know the name of the Final’s Polesitter!

Listen to Taponen’s comments at the Saturday Press conference:

To follow the last Qualifying Heats and Finals this Sunday, The RaceBox provides you with a special page including live timing and streaming, available tomorrow from 10:40 am!