The 2021 season of Champions of the Future opened last weekend in Genk with enormous fields in the OK-Junior and OK categories. All of today’s stars of karting showed their presence at the Belgian track, giving a glimpse of possible future champions of karting and beyond! 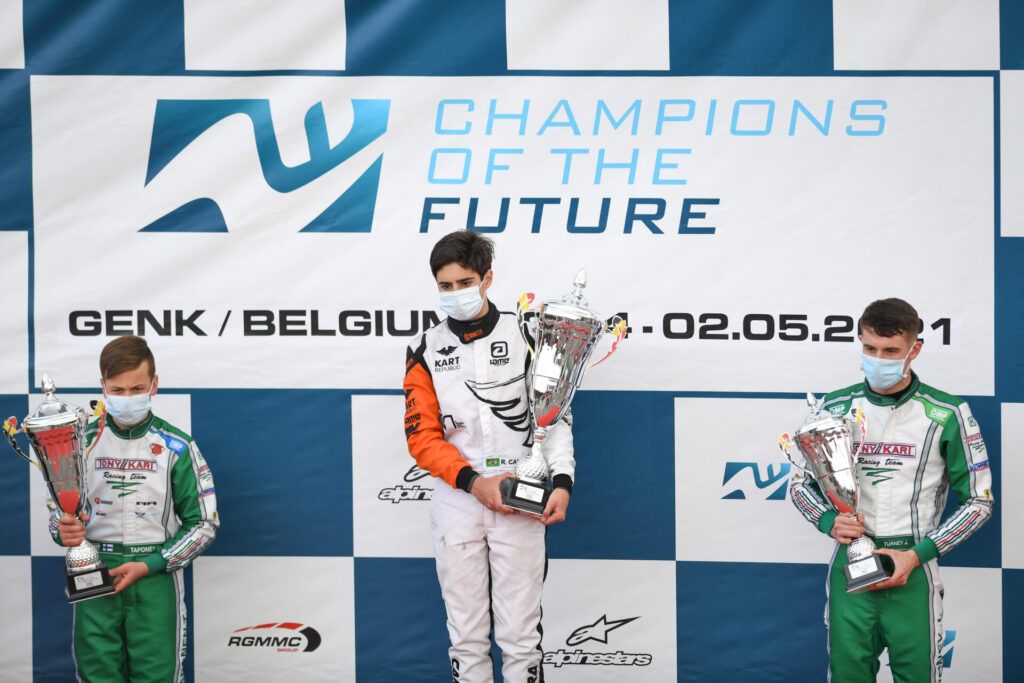 It was a top-level event hosted at the track of Genk, located in the region of Limburg, Belgium. All the top teams and manufacturers were there to compete for the top spots, with the best talent in today’s karting. Despite the occasional threats from the cloudy skies, the rain never came but for a few drops, leaving a consistently dry track throughout the event.

After the closely contested three days of racing, the checkered flag found the reigning World Champion Freddie Slater winner in OK-Junior and the promising Rafael Camara in the OK category.

Andrea Kimi Antonelli (KR Motorsport) was definitely expected to be one of the top contenders and he didn’t disappoint! He was the first to put his name on top of the list ahead of Luigi Coluccio (Kosmic Racing Team) and Tymoteusz Kucharczyk (BirelArt Racing) but was quickly beaten for the pole by Arvid Lindblad (KR Motorsport), fastest in the second group. Nikola Tsolov (DPK Racing) slotted in between Antonelli and Coluccio in fourth and Rafael Camara (KR Motorsport) just behind in fifth.

Arvid Lindblad was almost unstoppable winning all but one heat where he came second, with a similarly strong Andrea Kimi Antonelli behind him with a third-place finish, while Rafael Camara slotted in third just behind them at the end of the qualifying heats.

Sunday’s pre-final saw a slight change in order, with Antonelli on the top spot, but Joe Turney (Tony Kart) making a good jump to second and Rafael Camara completing the top-3, seeing the dominant so far Lindblad drop to fourth for the start of the final.

The final race was quickly decided as soon as Rafael Camara put the speed he had shown all weekend to good use, jumping to the lead and pulling away early on in the race, never looking back until the checkered flag. Behind him, there was a long battle between the defending Turney and his team-mate Tuukka Taponen (Tony Kart) who made a great comeback and managed to overtake at the closing stages to take second spot. The two KR teammates who had dominated up until then, Antonelli and Lindblad, dropped a few places back and finished fourth and fifth.

In the 3 groups of the OK-Junior, Julius Dinesen (KSM Racing Team) surprised by being the first to top the timesheets ahead of Alex Powell (KR Motorsport) and Harley Keeble (Tony Kart Racing Team). Matteo De Palo (KR Motorsport) topped the second group ahead of William Macintyre (BirelArt Racing) and Kean Nakamura Berta (Forza Racing) but didn’t manage to improve on the first group’s leader, slotting just behind in third, sixth, and ninth respectively. Kiano Blum (TB Racing Team) in the third group impressed with a blistering lap time for pole ahead of Lucas Fluxa (Kidix SRL) and Sonny Smith (Forza Racing) while improving the overall time by 4 hundredths of a second and getting the overall pole position.

Macintyre, De Palo, Keeble, Smith, Fluxa, Al Dhaheri (Parolin Motorsport), Blum, Nakamura-Berta, and Dinesen all scored victories in the highly-contested qualifying heats, showing already the number of potential winners in the category. Smith finished on top with the pole position for the pre-final, ahead of Dinesen and Blum.

Sunday was a change of scenery, even more for the Juniors, with a great comeback from Slater making up 8 positions on the prefinal to get to the top, ahead of Powell and Blum

The final was expected to see great battles between the front starting Powell and Slater, but the Junior World Champion Freddie Slater quickly took the lead and never looked back, while Keeble and Smith took the jump to close the top-3 beating Powell who was unable to compete for a podium place.

Further events to be announced shortly

As the calendars have been changing constantly this year due to the ongoing situations, we’re working non-stop and we’re very close to announcing the rest of this season’s events. We are striving to organize the highest level, most relevant events while making it as easy as possible for the highest number of drivers, teams, manufacturers, and other contributors to be included!

The Champions of the Future follows a long tradition of RGMMC productions who have invested in top-level media coverage with live streaming through the weekend, and daily interviews and highlights.

All races, as well as interviews and highlights, were made available on the RGMMC Productions Youtube channel. More information and complete results can always be found on the Champions of the Future Series official website www.championskarting.com, the RGMMC Group website www.rgmmc.com, and the Champions of the Future Facebook and Instagram pages with the handle @championskarting.