The DKM German Karting Championship officially started last weekend on the South Garda Circuit of Lonato. With Italy’s Lorenzo Travisanutto and Belgium’s Kobe Pauwels, the CV Performance Group Team was well-represented on the prestigious track and could celebrate victory in Italy but also in Germany where the team clinched the first four positions of the ADAC Kart Cup at Ampfing! 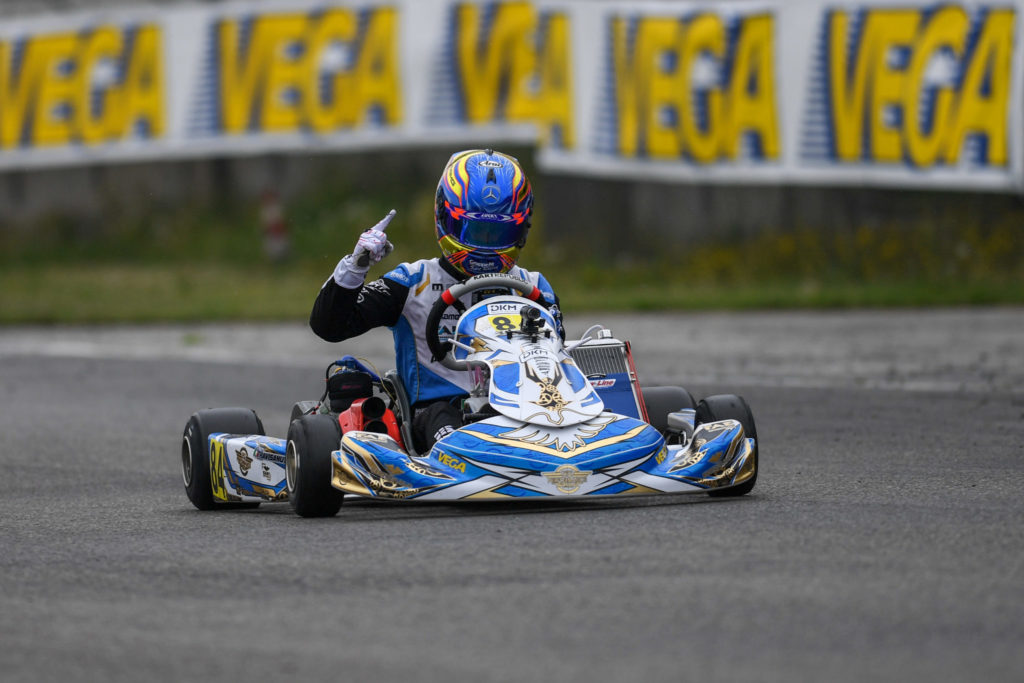 187 drivers from all around the World took part in the opening event of the new season of the DKM German Karting Championship. With another participation-record, the highest German kart series promised exciting races for its return on track, especially as the Italian changing weather conditions turned tire strategies into a gamble for teams and drivers.

For the third time, the circuit of South Garda has been selected as part of the DKM calendar. On home soil, the reigning World champion Lorenzo Travisanutto delivered the job one could expect from him. Fourth in Qualifying, he fought his way through the Heats to the leading position and added the fastest lap to his tally. It then came as no surprise to see him claim the first Final. In the second one, he was again leading before having to admit his defeat to finish second.

His Belgian teammate Kobe Pauwels also coped well with the Kart Republic chassis. He made it to position three and six, keeping his original starting position. In the race, he also counted as one of the top drivers and collected championship points right at the series’ kick-off.

Simultaneously to the race in Italy, the team also started with five drivers at the ADAC Kart Cup in Ampfing, Germany. On Sunday night, Linus Jansen won the X30 Senior class and finished ahead of his teammates Claudia Henning, Louis Kulke and Chris Rosenkranz. Ferdinand Winter followed in 12th position.

Christian Voß (CV Performance Group Leader): “I am very satisfied with our race weekend. The victory in Lonato is very important for us and makes us one of the favorites in the fight for the title. Also in Ampfing, the drivers have fought very well and brought a quadruple victory.”

After the kart sport, the CV Performance Group Team shone in other categories with Luzi Trefz celebrating great success at the GT4 European Series’ opening in Monza, Italy. On Sunday, he placed his Mercedes-AMG in fifth place in the overall rankings and won the Pro-Am class. A great result for the sports car rookie.

Christian Voß: “We want to offer our drivers a perspective after karting. Luci was runner-up in the ADAC Kart Masters last year, now he started in the GT4 and already won.”

The kart team continues directly from Italy and Ampfing to France to start in the first round of the FIA Karting European Championship taking place this weekend on the International Circuit of Angerville.